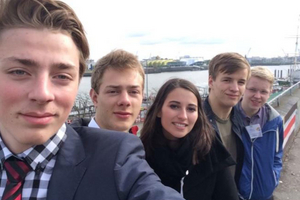 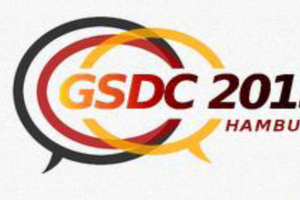 Debating means that two teams have a competition where they need to debate for or against a given topic. A typical topic, also called motion, could be: This house would allow gay marriage. “This house would” here means if the two teams were a country, the would promote or fight this policy.

Both teams represent one side of the house now, one side is team proposition and they have to argue for what it says in the motion and the other side is team opposition, they have to argue against what it says in the motion. The teams cannot choose which side they want to represent, which can be very difficult if one team has to argue against their own convictions, for example when it comes to arguing against gay marriage for example. After both teams gave 4 speeches each of the three independent judges decides
who won. Decisive factors are style, content, and structure of your speeches. The debaters themselves practice critical thinking, confidence, speaking style and of course their English in the tournament, so we all brought home some skills useful in school as well as in real life.

From April 30 to May 3 Team Heidehof went to Hamburg to take part in the 2015 German Schools Debating Championship. Also attending were schools from all over Germany, but as we were happy to see, a lot of them came from Baden-Württemberg as well. The hostel we stayed at was very nice, we very much enjoyed the rooms and the food we got there. The first debate we had was about whether Cannabis should be legalized or not, we had to argue for a legalization, that wasn't an easy debate but with good preparation and an amazing team effort we managed to convince all of the judges. From Thursday to Saturday we had had in total 6 debates, of which we lost three, all of them against the teams that ranked places one, two and four in the end. In the end we ranked 5th best team in Germany.

For half the team, i.e. Björn and Roman, it was the last schools debating tournament and we had a
great time debating together! As a team we want to thank our school`s Freundeskreis for the extremely generous financial support and also Elisa Walter, an ex-Heidehof-debater who accompanied us as coach and judge because Ms Schmid could not make it to Hamburg.

We are looking forward to the next tournaments in the second half of 2015!